Originally posted on the BBQ Brethren message board February 28, 2010

So, we have done the competition in Dover, DE the last 2 years, not necessarily as anything serious, just more for the experience and to see how good our chops are. (Do we still qualify as a rookie team?) Needless to say, we did not do so well.

Once we recovered from the last comp we both caught the bug in a serious way and decided to spend the winter doing our homework. Mike and I each bought a 22.5″ WSM, spent endless hours reading up on competition BBQ, watching BBQ Pitmasters

, and really worked on developing our recipes. Believe it or not, we did NOT do this in competition and just winged it…what bad move.

Next up was a lot of practice. We each practiced on our own a few times, took detailed notes with cooking logs and talked about what we liked and didnt like.

Then we did a full overnight cook together with all 4 competition categories using recipes and techniques we each developed on our own. This was a big eye-opener and allowed us to further decide what we want and dont want to bring to competition. During this practice I developed a timeline that would allow us to know hour by hour what we were supposed to do giving some leeway for each category for variations in time.

Last night we went through a full practice run as if we were cooking in competition. Since we both work full time jobs, we pretended that Saturday night was Friday night, but kept everything to the minute including turn-in times. So, we setup our prep table, EZ UP, smokers and everything we would need. 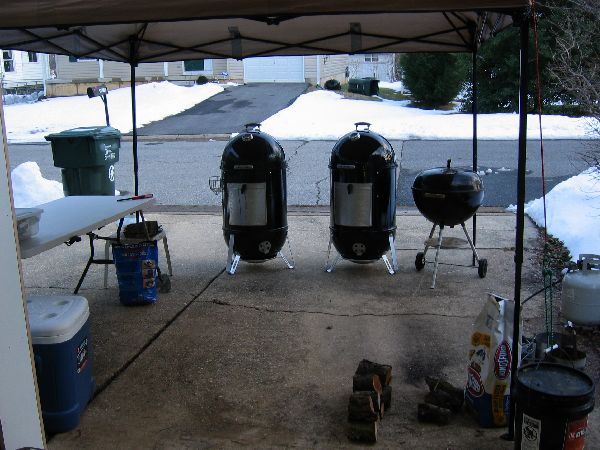 At least somebody is working 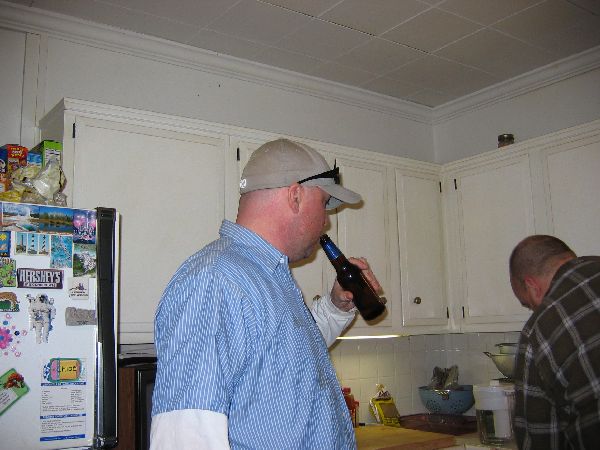 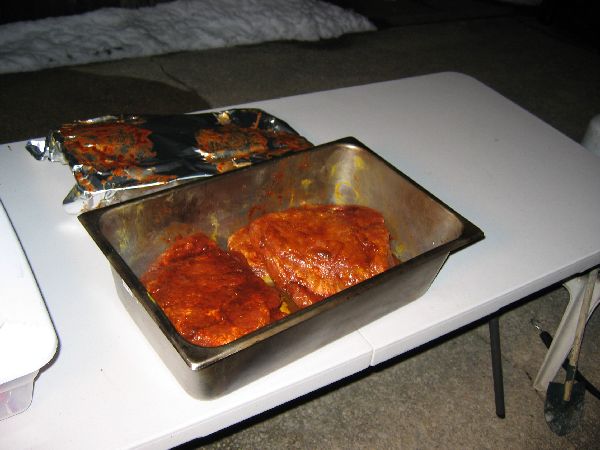 Brisket is injected and rubbed, they’re ready, too…but not til tomorrow morning. We have been successfully doing high-briskets… 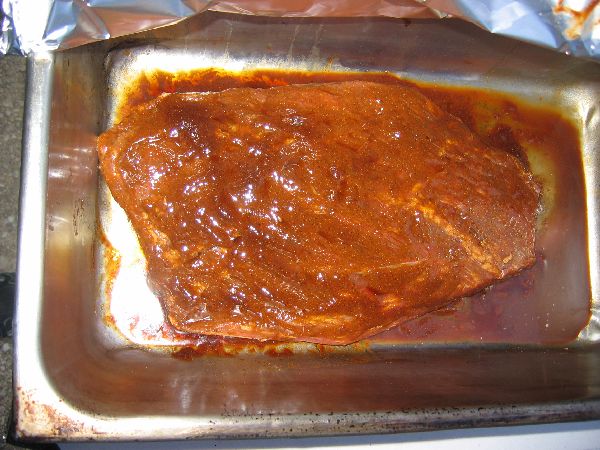 The best part about this timeline that we made up is that we were able to pencil in good amount of sleep time. We were NEVER able to get that in the last 2 comps we did. It’s 11:30pm, time for bed and up at 5:30. Hmmm, wonder if we’ll be able to get to bed that early in a real comp?

Brisket’s getting ready for foiling…. 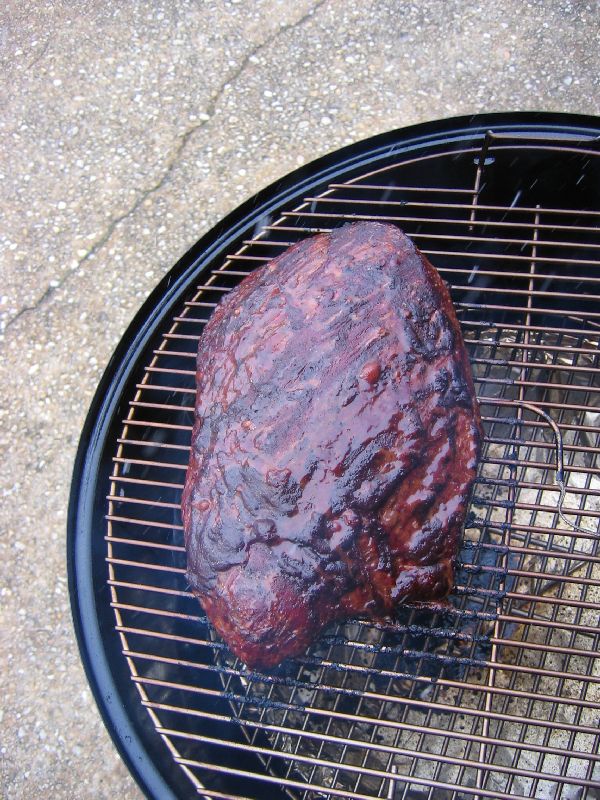 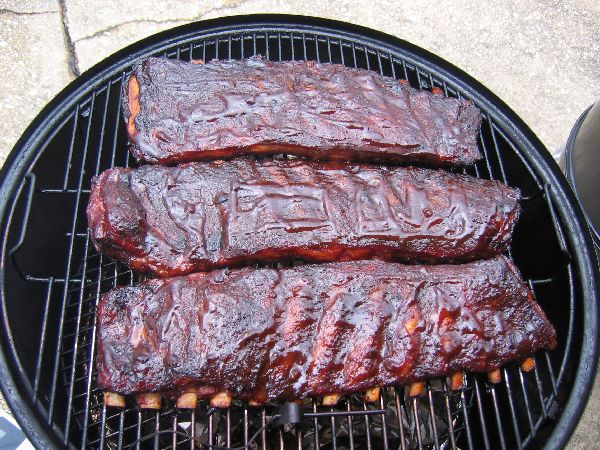 Thighs are sauced and almost done. Unfortunately, we found out that we seriously need to rethink our technique on cooking these. Maybe it was the batch of thighs we got, but the skin on these was horrible. All the ones we had done previously had great bite-through skin, but not these…STUPID CHICKEN… 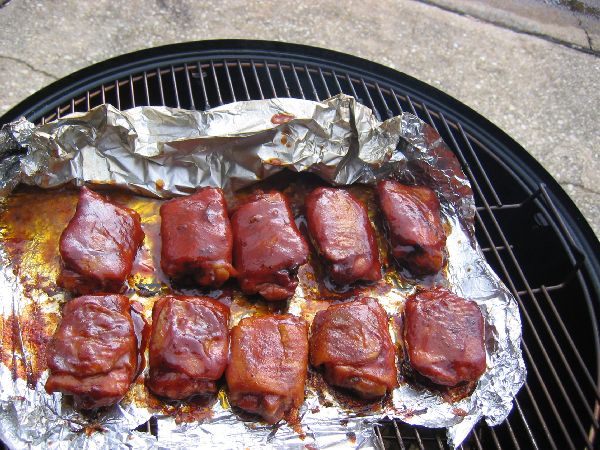 First turn-in, 12:00: chicken.
As always, flavor and meat texture was great. But that darn skin got us this time. As you probably see, we had some skin that tore. But just as bad, I just couldnt seem to get these cut to consistent sizes. The thighs seem all malformed and different sizes. This was really the first time I had this problem. Next time, no Tyson chicken. 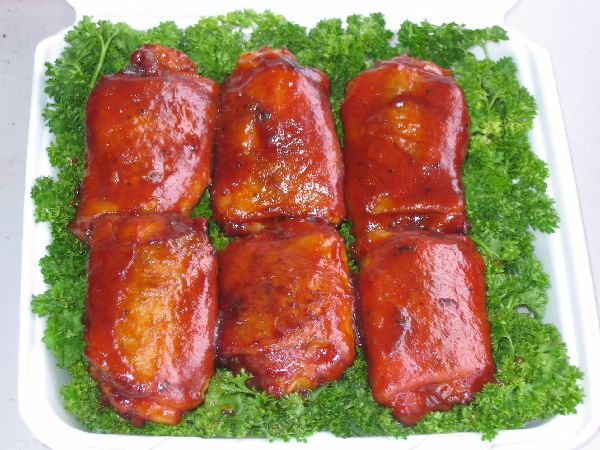 Next turn-in, 12:30: Ribs
Let me just say that we both really love baby backs more than spares, and have each cooked some really incredible BBs in the past. Buuuut, the judges dont seem to like them so much. With that, we’ve spent the winter practicing on spares. One of the problems seems to be getting straight bones. And as this box illustrates, that was the case today. Out of 3 racks, these were the best looking. What really suprised me was the difference in flavor and texture of each rack. The other problem was they didnt seem to cook the same either. One rack was way undercooked, where another was almost overcooked. This was even after rotating the racks throughout the cook. Not a problem we’ve had with BBs before. 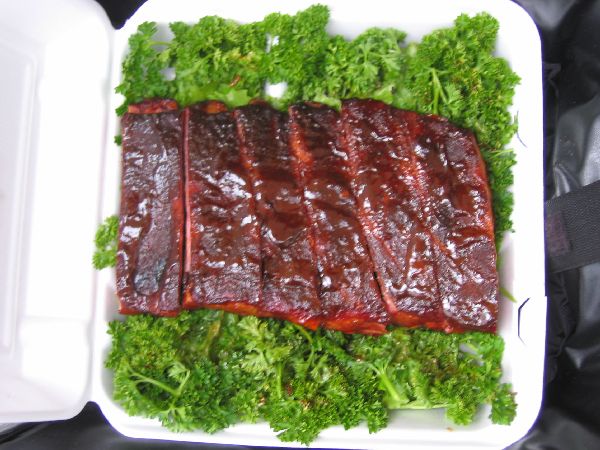 Third turn-in, 1:00: Pork
Boy, did this one really bite us in the a$$! The butts went on at 9:30pm with the WSM at around 225-240 before bed time. Temps maintained all night and were at about 215 when we got up at 5:30am. Then temps creeped down even more than that and we coudn’t seem to get them back up until after about 8 when temps shot up towards 250 (no idea why or how). They maintained this temp fabulously for the rest of the morning, but the meat temps started dipping when we had temp problems and we just couldnt seem to get them back up quick enough. I finally moved them to the high-heat WSM running at 350 and finished them off. But I think the damage was done. Plus, I think we broke a KCBS rule by removing it from one smoker and putting it on another. DOH! Anyhow, the when I trimmed off the money muscle, it was really mushy and fell apart when I cut it. Then when we tried pulling the meat, it just seemed a little bit underdone. OH well, this is how we learn, right? NEXT???? 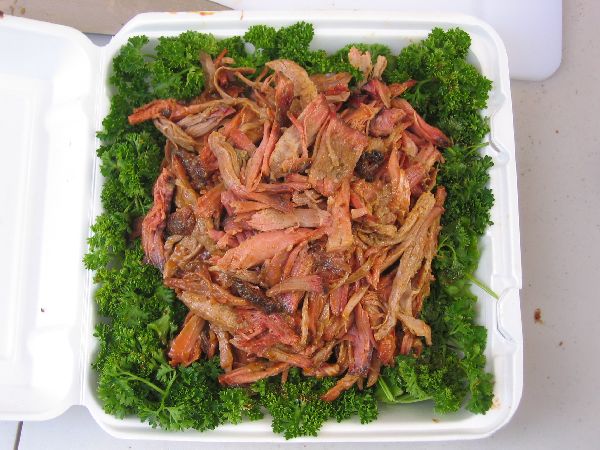 Final turn-in, 1:30: Brisket
This has been my personal challenge for 2010. I will master the brisket! I’ve been using choice flats because they are the easiest, best cut for me to get locally. Packers so far have been non-existent. But that’s OK, I would rather learn on these and work my up. Fortunately, they have been getting better each time

. When I trimmed this brisket, I was a little concerned about the amount of fat and shape of the meat, but went through and did my usual. I made up some of my “fake burnt ends”, dipped them in the meat drippings from the foil and then cut the brisket. Much to my surprise this was moitsest one I’ve done so far! Maybe a result of all the extra fat? The shape for persentation wasnt so great, but not bad and the flavor was spot on. And those fake burnt ends? They were like candy. Not real sweet, just VERY VERY TASTY! 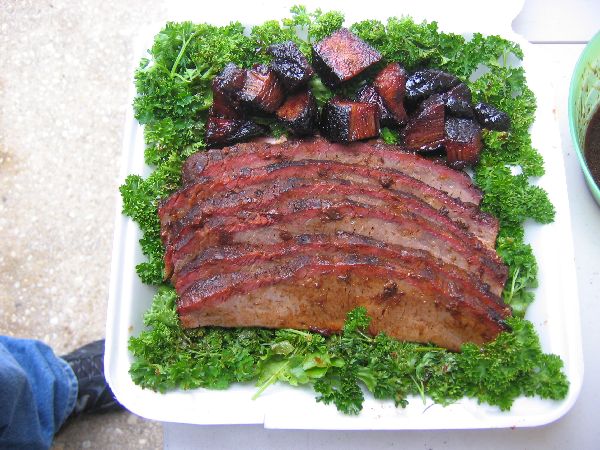 The putting greens weren’t the best, especially since we kept reusing the same box and greens

. But we really wanted to focus on the meat presentation more. Which just goes to show how important these pictures are!! Looking back on these, I can see we rushed a bit too much and could have done better. But, I think I can blame the weather…a little bit. It was in the 30s all day and I really wanted to make sure the meat stayed warm, a problem we had in Dover last year. Last year, Dover was FREEZING cold and I know most of turn in boxes probably showed up at the judges table stone cold, so I wanted to work on doing turn ins in these conditions. After we placed the meat in the box, we left the box set for at least 5 minutes to simulate how they might show up at the judges table. Temps were pretty considering the cold weather

I’m exhausted right now, but it was a great and valuable experience. And I know we both learned a lot. Maybe some other rookie teams can take something away from my notes here. But I can’t say how important these practice runs really are. The best part is the left overs!